I grew up reading a bunch of comics.

I initially started with the Marvel / DC types, then moved on to the British comics such as 2000AD and Tiger whilst in secondary school, and returned to Marvel / DC after that when i studied in the UK.

I have a whole range of comic reading materials, but today had a bit of a nostalgia time googling the 80s British comics. I have not seen these comics for a long time now. And of the characters I remember reading, only Judge Dredd and Dan Dare remain in recent memory. So i decided to check out the titles i used to read. So here are some of them (i would be happy if others can jog my memory too)… 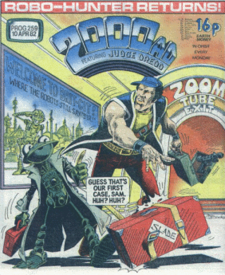 I used to like this series as it combined classic noir sleuth stories in a future context – with investigations revolving around robot crimes.

Strontium Dog wasn’t one of my top stories in those days, but i sort of liked the concept of mutant bounty hunters. 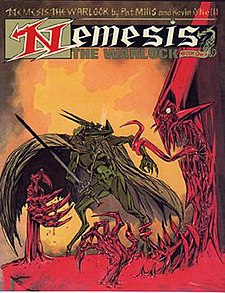 Nemesis the warlock was one fantastic comic series that i liked because of the extreme artwork. The stories were unusual and surreal, but the art and concept was out of this world.

Rogue Trooper was a popular story amongst my friends at the time. This was a classic war story that kids my age then loved. The twist was that this was a story about a Genetically engineered soldier who was looking for his commanders who betrayed them.

Slaine was a typical barbarian tale that was quite popular with kids our age then.

The characters have this very interesting perspective on life and concepts. This site has some good selection.

I read today’s NST cover on Lat’s Kampung Boy debuting in the USA with a warm feeling.

Well done to Datuk Lat for the break through he thoroughly deserves. I for one have long been entertained by Lat’s frequently honest and perceptive views on life, the universe and everything. Even today Lat continues to put a smile on my face with his witty views on current affairs.

Well done too to First Second Books for bringing what is a truly Malaysian literary & art work to a wider public. One hopes that commercial success comes with this.

Some reviews from the US include:

from Starred Review in the January 2007 issue of The Bulletin of the Center for Children’s Books:

The author-illustrator of this title has long been a cause celebre in Southeast Asia; Kampung Boy, his memoir of his youth in a small Malaysian village, was first published there in 1979. And while it’s been imported to a multitude of countries since then, its appearance in this edition marks Lat’s first American publication. It’s been worth the wait: this is a lively and engrossing tale of an everyday life vastly different from those most American kids experience.

Lat grows up in a cool and airy house on stilts in a rural area of Western Malaysia’s Kinta Valley, the world’s most productive tin-mining region. Here rubber smallholdings provide income for family members, grownups whiz around importantly on bicycles (brand names as lovingly treasured as the names of car models) while the only train is a blur that “never stopped at our kampung,” and students pay the schoolteacher whatever they have to offer (some give him fifty cents or a dollar, others give him a plate of rice or sugar, some provide him with firewood they’ve picked up on their way to class). The village follows Indonesian and Muslim tradition: Lat’s birth (at which his grandmother was midwife, recompensed with a roast chicken, a plate of yellow rice, and batik sarong) is followed by his ritual hair-shaving ceremony on the forty-fifth day (which involves what looks to be a very lulling rocking in a hammock), and he resignedly undergoes circumcision at the age of nine. The first-person narration, appearing in a font emulating hand lettering, has an easygoing, comradely tone, and it’s filled with understated affection for family, neighbors, and village life. Lat’s a master at making the story itself involving even as he weaves it into a visually dependent narrative, so it’s interesting to hear about his mother stuffing him with porridge even as the art shows a spiky-haired baby spitting the food back out with a decisive “ptooi!” Context clarifies many unfamiliar elements—even if kids don’t know exactly what a tin dredge is, they’ll understand huge local machinery that seems monstrous to little kids—and the story has a warm assumption of insider status and an emphasis on universally understandable experiences (horsing around with friends, evading authority) that makes it a more intimately involving tale than those that carefully explain their daily realities to distant readers.

The black-and-white pen-and-ink illustrations are, if you’ll pardon the pun, the real draw; though the format isn’t graphic-novel-styled panels, the single-page scenes vividly and comedically portray Lat’s life. The kampung is a cheerful place of people hanging out in the tea stalls or checking out passersby from the open doorways of their stilt-legged houses, and the occasional caption helps identify key people or elements; a compact tree stump with a wild thatch of dark hair, young Lat is often exaggeratedly dwarfed by a confusing adult world or followed by motion lines as he darts through the countryside (sometimes happily butt naked).

The district apparently has changed considerably since Lat’s youth; like Robert Peck’s or Gary Paulsen’s tales of youthful rural hijinks, this book describes a life that is all the more attractive for its disappearance. And as in so many idylls of country innocence, the protagonist himself must leave this world behind, in this case in a mixture of excitement and regret as he departs for boarding school with his grandmother’s words ringing in his ears: “Be humble because we are a humble people. Always remember God and don’t forget about us back here in the kampung.”

The book’s audience not only won’t forget, they’ll wish for more (perhaps the second installment of this autobiography, Town Boy, will arrive on these shores soon). This companionable chronicle achieves that rare thing in an international title: making readers feel like they’re hanging out with a friend halfway around the world.

Lat’s Kampung Boy can be purchased at Amazon.com.

Whilst I am at the movies…. here’s a short teaser from Spider-man 3.

The first two films were both excellent (the second slightly better)… and I expect the third to be equally as good. The appearance of the black alien / venom makes it exciting.

Anybody who reads batman and daredevil graphic novels will know the name Frank Miller. It has been a while however since Miller penned anything related to either of the DC or Marvel superhero stories.

He has produced some landmark graphic novels such as –

These were all fantastic stories and gained a lot of critical acclaim and together with the likes of Alan Moore’s The Watchmen, raised the level of comics / graphic novels in popular culture. I would strongly suggest getting your hands on these books. Daredevil has always been my personal favourite.

Miller subsequently penned and wrote a number of other once off hero books as well as other stories including “300“. 300 is now being made into a film which is due for opening in the US on 9 March 2007. The trailer can be found at Apple’s website. It looks interesting.

300 is a graphic novel, written and illustrated by Frank Miller with painted colors by Lynn Varley. It depicts the Battle of Thermopylae and the events leading up to it from the perspective of Leonidas, king of Sparta. The comic was particularly inspired by the 1962 film, The 300 Spartans, a movie that Miller watched as a young boy.

Every page of the comic was illustrated as a double-page spread. When the series was gathered into hardcover form, the individual pages were twice as wide as a normal comic. Miller’s art style for this project was similar to his Sin City work, although the addition of color is an obvious difference.

300 was initially published as a monthly five issue comic book series by Dark Horse Comics, the first issue published in May 1998. the issues were titled Honor, Duty, Glory, Combat and Victory. The work was collected as a hardcover graphic novel in 1999.